Carleen Kelemen, director of the Convergence Partnership Office for Cornwall and the Isles of Scilly, has won the Outstanding Achievement Award at the Cornwall Works WISE awards 2012.

Kelemen, who received the award today at a ceremony held at the Headland Hotel in Newquay, came to Cornwall as director of the Objective One Partnership Office in 2000. She remained when Convergence succeeded Objective One and will be finishing in June following a change in communication structures.

She received the award from Richard Bayly, formerly of Government Office South West and a winner of the Outstanding Achievement award in 2011.

Bayly paid tribute to Kelemen’s career in Cornwall, saying “she advised and coached and encouraged and became a deep and trusted friend and advocate and champion”.

He said: “She created a voice for Cornwall without ever focussing the role on herself, which in itself says volumes about her modesty and humility and her sense of wider service. This modesty may be what made her such a powerful and natural and committed believer in doing things by and in partnership.

“Carleen lives, works and breathes a faith that we can all do better today, tomorrow and into our futures. She is also a wonderful role model for a rich diverse life, working hard and enjoying leisure, focussed at work and committed at home.” 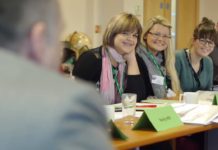 Award for Clear About Carbon