Sharp’s Brewery has been awarded two prizes in this year’s World Beer Awards.

Both Sharp’s Special and Chalky’s Bite were named the World’s Best Pale Ales, and head brewer Stuart Howe commented: “We’re honoured that two of Sharp’s most popular ales have been recognised at the World Beer Awards. It is a mark of the highest recognition from the industry.”

Sharp’s Special (5% ABV) was recognised for its “spicy and perfumy hop aroma”, while Chalky’s Bite (6.8% ABV) was praised for its “well balanced, mildly herbal taste with a sweet bitterness”.

The recognition comes in the wake of Sharp’s receiving two medals at the International Beer Challenge Awards, for Monsieur Rock and Doom Bar. 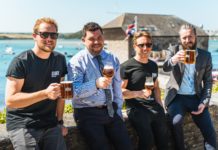