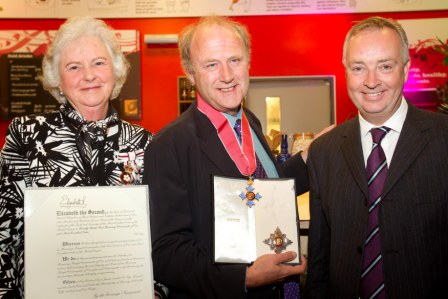 Tim Smit paid a glowing tribute to the teams behind the Eden Project and the Lost Gardens of Heligan when he officially became an honorary Knight this week.

The Dutch-born co-founder and chief executive of Eden, also renowned for the restoration of Heligan, received the award from the Lord Lieutenant of Cornwall Lady Mary Holborow, on behalf of The Queen.

At a gathering of family, friends and colleagues on Monday evening (September 5) in The Core education centre at Eden, he said: “What’s great about Eden and Heligan is that there’s a sense of that phrase ‘falling into good company at the right time.’ Heligan and Eden are good examples of people meeting at the right time to do something special.”

He also paid tribute to Lady Mary, who is soon to retire as Lord Lieutenant, saying: “If there’s any one person who has done more to change the outside perception of Cornwall, then I don’t know them.”

He was given the honour – full title Honorary Knight Commander of the Most Excellent Order of the British Empire (KBE) – in recognition of his services to public engagement with science. As he put on the KBE medal, he joked: “This is bling with attitude!”

They were joined by Kevin Lavery, chief executive of Cornwall Council and Clerk to the Lieutenancy, who read the citation for the award. It mentioned Smit’s many achievements, including the £1 billion-plus boost Eden has brought to the local economy since the project fully opened.