Redruth-based building firm, KPK Builders and Developers Ltd, has won an award in recognition for how its project has enhanced the environment.

Founded in 1981 by Tim and Jean Kitchen, KPK has developed a reputation for restoration and renovation projects and has now gained national recognition at The Green Apple Awards 2011.

Competing against 500 other nominees, KPK and architectural partner, Alison Bunning, won an award for a private project located at Kestle Barton near the Helford River.

The project involved sympathetically restoring old barns in a way that was environmentally friendly and in-keeping with the surrounding environment. The barns were restored using natural, local materials such as Cornish stone and all materials used are recycled and reusable.

Company director, Jonathan Cann, said: “We’re really honoured to have won a Green Apple Award for this two-year project. Our aim was to sympathetically restore the buildings in a way that was not only environmentally friendly, but to also restore them to look as much like they did originally, which I think we’ve succeeded in doing.”

The International Green Apple Awards for the Built Environment and Architectural Heritage were launched in 2000. Run by The Green organisation, the awards are presented annually in recognition of companies, councils and communities carrying out projects that enhance the environment. 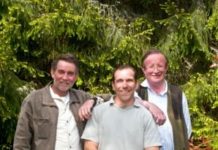