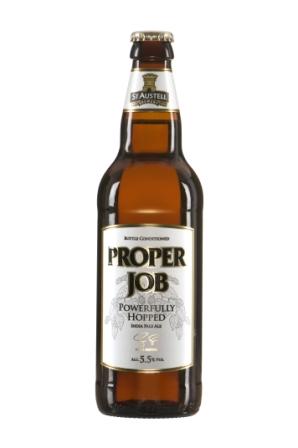 St Austell Brewery is celebrating after winning two of the highest accolades in the drinks industry at the 2011 Quality Drink Awards.

Proper Job was named the best ale in Britain, and Smugglers picked up the award for best speciality beer at the ceremony held yesterday in London.

It is the second year running that a St Austell Brewery ale has held the title for best ale, after Admiral’s Ale beat off competition to win the award at the 2010 ceremony.

The judging process, carried out by a panel of industry experts, takes into account taste, visual appeal, brand or product identity, and perceived value for money.

The judges also consider innovation and the key selling points of the beers, along with the success achieved by the product measured against the brewery’s own objectives.

Jeremy Mitchell, St Austell Brewery’s marketing director commented: “To have some of the most knowledgeable and influential people in the drinks industry recognise two of our beers as the best in the country is a fantastic achievement.

“We were up against some great competition in both of the categories, but Proper Job and Smugglers are both excellent and deserving winners and we are very proud.”