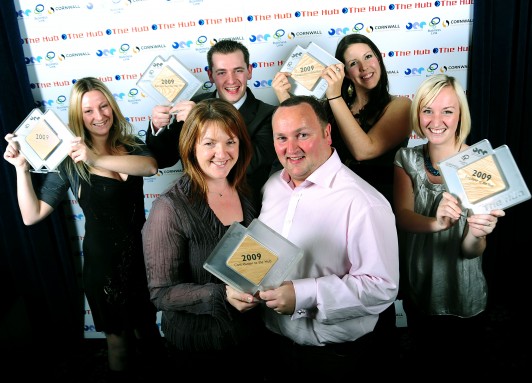 Some of the most forward thinking and dynamic Cornish business people came together last night (Thursday November 26th) to hear the winners of this year’s Hub Awards announced.

A glittering awards dinner at the Atlantic Hotel, Newquay, saw more than 100 people gather to hear the winners of the Employee of the Year, Innovator of the Year, Best New Business and Entrepreneur of the Year awards categories. A special award was also given out by the Hub committee for Contribution to the Hub.

Sponsored by Business Link, Cornwall Development Company and Unlocking Cornish Potential, the awards, celebrated the individual efforts of those young entrepreneurs and employees making a real difference to a Cornish business.

The individual success of winners in the Hub Awards’ five categories was applauded, as was the  success of the Hub, which has grown significantly over the past 12 months. This year’s guest speaker was Dave Meneer, CEO of Fifteen Cornwall. Dave took to the stage before the awards got underway to talk about sustaining success in the county and about Cornwall’s enterprising and dynamic spirit.

Hub committee member Andrew Weaver of Live Events South West, said: “The Hub has always been about forward thinking and despite the turbulence of the last year, coming together and celebrating the individual successes of these Cornish business people was really great. We have worked really hard to create an event that really showcased what great talent Cornwall has to offer and regardless of winning awards, everyone shortlisted deserves our congratulations for their commitment and determination to make a difference.

“Special thanks to our sponsors, Business Link, Cornwall Development Company and Unlocking Cornish Potential, without whom such an event would be possible. A big thank you to our speaker, the judges and also to all the people on the Hub Awards committee who have given up their own time to make the awards the success it was.”

The title of Employee of the Year this year was handed to Charla Symons, Marketing and Communications Officer, Totally Truro. In the hardest category, Charla was commended by the judges as succeeding and making a real difference in a demanding and difficult role.

This year, Innovator of the Year was awarded to Angela Young, Moon Estates and 100% Organics. The judges were impressed by Angela’s real passion and determination to grow both businesses in the county and beyond. The judges were impressed with Angela’s knowledge of the market in which they operate, and the brave step to launch 100% Organics, produce a great website, and display all the characteristics needed to be the outright winner of Innovator of the Year.

The Best New Business award was scooped by Truro-based, Redfuse Internet. Despite the difficult climate in which to launch a new business, Mark Grice impressed the judges with his commitment to growing the business in a competitive market and commented on how his passion to succeed was infectious.

Helen Davies, who launched EKO Sense in September this year, scooped the top title in the Entrepreneur of the Year category. 27-year-old Helen, launched her own range of eco-friendly clothing with an e-commerce website ekosense.co.uk and catalogue of the Autumn/Winter 09 collection.
The judges commented on Helen’s true entrepreneurial spirit and how passionate she is about her product, willingness to succeed and sheer determination.

The Hub committee also handed out a special Contribution to the Hub award. This year the trophy was handed to Rob and Andrea Edlin of Niddocks Internet Marketing. The committee thanked Rob and Andrea for supporting the Hub, attending almost every event since they moved to the county in May 2007 and helping the Hub grow.

Initially set up for young business people in Cornwall, The Hub has expanded to accommodate people working at all levels of business, from newly appointed graduates to company directors. The events also regularly attract newly formed start up businesses as well as well established Cornish companies.
The events, which are held on the last Thursday of every month, are planned to support the development and requirements of business people from all sectors. From workshops and speed networking events, to summer socials and the highly anticipated annual awards ceremony, The Hub calendar offers a number of opportunities to network with like-minded people.

The Hub is a not for profit organisation sponsored by a number of public and private sector businesses.  The events are planned and managed by a committee of volunteers, who give up their time to produce a varied plan of events.

Promoting Cornwall “for one and all”