Sanders-Shiers, the Falmouth-based firm of 3D visualisers, has won the Best Architectural Exterior Image category at this year’s CGArchitect Awards.

The company received the accolade for its pre-visualisation of private apartments in Oslo, beating over 1000 images from leading 3D artists around the world.

Alan Sanders, who co-founded the company six years ago, commented: “We are delighted to receive this award as it will certainly help further establish our name within the industry.”

In addition to winning its category, the image was also nominated for Best Overall Architectural Image.

The awards ceremony was held at the Mundos Digitales conference in La Coruna in Spain, where James Lawley from Sanders-Shiers represented the company and accepted the elegant trophy.

As well as the many international projects on which Sanders-Shiers work on, the company also has considerable experience of local projects, including the Watergate Bay Hotel development, Rockit Apartments in Newquay, Eddystone Road in Wadebridge and many assignments for private residences. 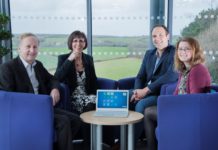