Having spent the first eight years of his career at established independent estate agencies in Falmouth and Truro, Davies joined Savills two years ago and focused on the marketing of prime coastal and country properties.

Jonathan Cunliffe, Savills head of Cornwall, commented: “In Cornwall we had a very encouraging year in 2014 with some key sales and the market showing very positive signs for recovery.

“Ben has played a fundamental role in this success and we congratulate him on his promotion.” 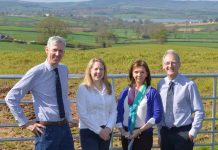