The head of Cornwall’s leading agricultural college has raised the impact that farming could have in tackling the climate crisis during a meeting with the Secretary of State for education.

Jamie Crisp, head of campus at Duchy College Stoke Climsland, met with Gavin Williamson at a virtual ‘round table’ to discuss the needs of land-based education.

The meeting followed a Government ‘fact finding’ mission that saw a leading MP visit the college last month to see for himself how Duchy College is meeting the needs of local employers, whilst teaching cutting-edge methods of farming to the next generation.

During the recent meeting with the Education Secretary, Crisp took the opportunity to press the case for sustainable agriculture to be part of nationally recognised technical qualifications.

Speaking afterwards he said: “Following on from our visit with Robbie Moore MP at Duchy College Stoke Climsland, it was a privilege to be invited to a round-table meeting with the secretary of state for education, Gavin Williamson, alongside other land-based institutions, employers, stakeholders and trusts.

“The enthusiastic approach, keen interest and active involvement that Mr Williamson has taken is hugely positive for our industry.

“Having meaningful and robust conversations directly with the secretary of state, where we are able to showcase the fantastic things land-based education delivers on, but also to express the importance of land-based education in line with current government agendas, is hugely important.

“Land-based education will be a vital part of finding the solution to the climate crisis and actively working towards carbon net zero, so it was a pleasure to be able to share some of the amazing strides we at Duchy College have been making in this area, both in terms of what we teach but also what we practice on our own farms.”

Duchy College Stoke Climsland has been praised for some of the steps taken to cut carbon emissions in the classroom as well as on the farm.

The state-of-the-art research, training and education facility at the college’s Stoke Climsland campus, called Future Farm, is a one-of-a-kind dairy farm that sees the most up-to-date methods of sustainable farming put into practice and shared with the college’s agriculture students.

Crisp added: “Being able to openly debate some of the real challenges the sector faces whilst discussing the innovative ways we are meeting the demands of local and national employers, was a brilliant opportunity for us as a college group that specialises in land-based courses.

“I look forward to future opportunities to discuss these matters.” 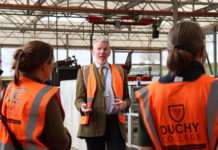 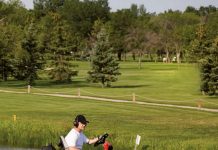