Coconuts Naturally is seeking the investment through the equity crowdfunding platform, Seedrs, to support its expansion into a leading UK supermarket.

Launched in 2015, the Redruth-based business achieved more than 100% sales growth every year in its first three years, partly thanks to the exploding customer appetite for vegan products.

Along with continuing growth in the vegan sector, Coconuts Naturally believes it is ideally positioned to take advantage of other major growth areas in the UK food industry, including growing demand for organic food.

The company is now seeking a £100k investment through crowdfunding, based on a pre-money valuation of £1.35 million. The funds will go towards:

Coconuts Naturally is predicted to sell £150k worth of ice cream by the end of this financial year, which is set to soar to £2.3 million next year (2019/20), thanks to a major UK supermarket launch into more than 600 stores.

Mills said: “Following my appearance on BBC Dragons’ Den and the incredibly difficult decision to turn down Jenny Campbell’s investment offer, the business has grown from strength to strength, with 2019 set to be our biggest year yet by far. Securing this additional investment through crowdfunding will allow us to expand our team in order to fulfil our ambitious growth plans, while still remaining loyal to our roots.”

In order to further strengthen its market position and ensure its product catches the attention of busy shoppers, Coconuts Naturally is completing a company re-brand, relaunching in March as Coconuts Organic.

“We pride ourselves in producing the creamiest, best-tasting vegan ice cream on the market and have ambitions to become the leading luxury dairy-free ice cream brand in the UK,” added Mills. “Our rebrand to Coconuts Organic gets us ready for our supermarket scale-up in March and lays a stronger foundation for further expansion in the future.

“It’s such an exciting time for us, and the crowdfunding offers an opportunity for our customers to be a part of the journey.”

The crowdfunding campaign pre-registration page is now live on Seedrs for potential investors to mark their interest. The campaign will launch to the public from January 28. 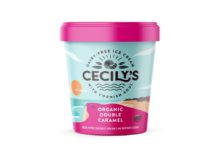