In addition to shipping gigs to the islands on the Gry Maritha freight vessel and Scillonian III passenger ferry during the last two months, the Steamship Group transported thousands of passengers and supplies last week, with the total freight transported on three sailings of the Gry weighing in at more than 260 tonnes – the equivalent weight of 45 elephants.

Hundreds more spectators and supporters journeyed over during the weekend, with more than 5,000 items of luggage handed by the Scillonian III – almost four times the amount managed on a normal weekend.

Cargo shipped to Scilly for Gig Weekend included 142 gigs delivered in staggered transport over the last six weeks, as only two or three gigs can be transported on the Scillonian at any one time, and up to a maximum of eight on the Gry at once. Gigs have been on every sailing of both ships since mid-March to ensure they arrived on the islands in time for the weekend championships.

Other freight includes supplies for crews and onlookers, such as 20 tonnes of beer, four trailers of portable toilets, and over a tonne of pasties.

This huge logistical operation is overseen every year by the group’s freight bookings facilitator Debbie Hunt, with group staff fine-tuning the delivery programme over the years so it works effectively, and both ship’s crews working long hours to ensure everything is successfully transported.

20 tonnes of beer, four trailers of portable toilets, and over a tonne of pasties

The Isles of Scilly Steamship Company has supported the World Pilot Gig Championships since its inception 28 years ago, and has transported more than 1,000 gigs to and from the islands over the years, along with providing specially discounted travel rates for competitors and running four extra sailings of the Scillonian over the weekend to meet demand.

Hunt said: “We put in months of careful planning for gig weekend every year but we’ve been doing it for so long now that the staff have it down to a fine art. This year has been bigger than ever however, with record amounts of freight transported to Scilly, alongside the 142 gigs which the group is happy to deliver to support this fantastic event.”

The World Pilot Gig Championships celebrated its 29th event this year, having begun in 1990 with just a handful of Cornish teams taking part and growing to become the highlight of the Scillonian and Cornish rowing calendar, with more than 100 teams competing.

Still leaving after all these years 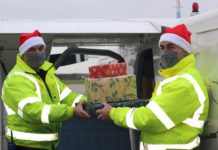