For the first time since the 1950s, large quantities of Cornish granite are being exported from Cornwall’s Penryn River for major civil engineering projects.

Thousands of tonnes of heavy grade “rock armour” from Chywoon Quarry, near Falmouth, are being shipped from the historic, deep-water Falmouth Wharves by specialist Cornish marine contractor Keynvor MorLift for an important large-scale south west coastal protection programme near Paignton on the south Devon coast.

The project, overseen for Torbay Council by the Torbay Development Agency, has seen almost 15,500 tonnes of granite boulders extracted from Chywoon quarry, transported to Falmouth Wharves for installation on the KML’s rock barges using specialist excavators with large rock grabs.

Using KML’s fleet of multi-purpose vessels, the rock barge is towed out to Hollicombe Beach, where the stone is discharged onto the beach and placed into the rock revetment, protecting Hollicombe’s and adjacent Oil Cove’s crumbling cliffs and the railway line behind, from erosion by the sea and extreme weather.

The last time such vast quantities of Cornish granite were shipped from the vicinity was in the 1950s when Freeman’s Yard was still operating its stone masonry business further up river on its wharf in Penryn. During its long and distinguished history, Freeman’s cut and shipped granite bound for major projects including the building of lighthouses and London embankments.

“This has been a working river for hundreds of years and it’s a matter of huge pride for us to see our historic Falmouth Wharves still used for marine industries,” said Keynvor MorLift MD, Diccon Rogers. 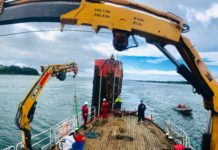 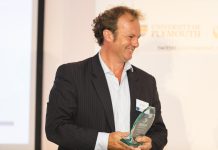 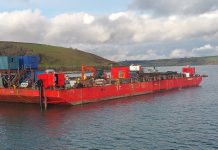