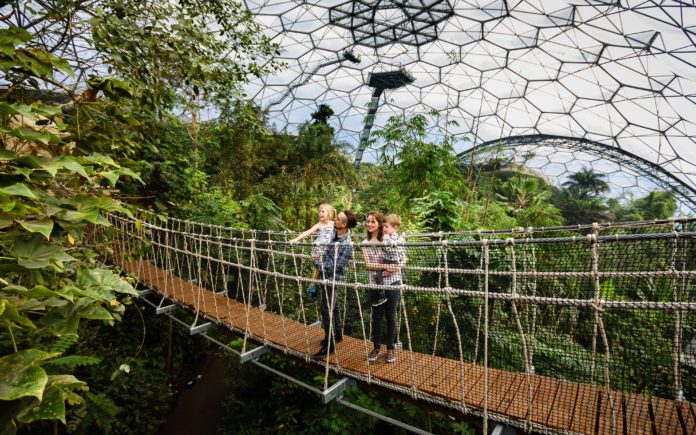 The Eden Project has published its annual report, revealing “another encouraging year”.

According to its accounts for 2016/17, Eden Project registered a ‘trading cash surplus’ of £1.65 million, which although down from the previous year’s £1.82 million, was a fourth successive year that it had recorded a significant profit.

For the year ended March 31, turnover grew by more than £1.8 million to £22.6 million, while the annual number of visitors broke through the one million barrier for the first time since 2011.

There was continued growth in numbers for Eden degree programmes, with 100 students now studying on-site, in partnership with Cornwall College and Plymouth University.

The team has been strengthened by the arrival of a number of new staff at all levels, in particular the appointment of Dr Mike Maunder as director of life sciences and Peter Wroe as finance director.

The first apprentices graduated from Eden’s rolling two-year programmes, some of whom have joined the permanent team.

Nearly 50,000 children visited the Cornwall site with their schools and the year also saw the launch of Little Eden, an outdoor club for under-fives.

Eden also received planning permission for the updated design of a 109-bedroom hotel on site.

In 2016 the eighth annual Big Lunch, the Eden-led project, was attended by 7.3 million people, including Royal Patron HRH The Duchess of Cornwall and HRH The Prince of Wales.

A set of on-site social prescribing initiatives were launched, including those tacking social isolation, COPD and other health issues.

Finance director, Peter Wroe, said: “It has been another encouraging year, with good results in terms of our trading surplus, turnover and visitor numbers, all of which have helped us make significant investments in the team and our site.”

He said that the project would continue to invest in the Eden site in Cornwall. This would include construction work on a £3 million permanent exhibit called Invisible Worlds which will explore the world beyond the senses.