The formal arrangement marks the first official partnership between the neighbouring ports.

Under the Memorandum of Understanding (MOU), both ports will offer emergency cover for each other’s pilot vessels which transport marine pilots between the shore and incoming ships.

The arrangement follows joint discussions about how to react to the reduction in demand for pilotage at both ports. In order to reduce operating costs, Falmouth Harbour Commissioners has made the decision to operate the pilot service with a single pilot boat, Arrow. The LK Mitchell, which has served as a pilot vessel in Falmouth for 40 years, is being offered for sale.

The MOU will allow Fowey to be supported by Falmouth’s ten-year-old pilot boat, Arrow and Falmouth Pilot Services will have access to Fowey’s two pilot cutters, Gribbin and Gallant.

Captain Mark Sansom, chief executive and Falmouth Harbour Master, said: “Through collaborating with Fowey we are taking positive steps to manage reduced resources whilst maintaining the resilience of both of our services, at a time when the  use of both ports has reduced.

“We are in challenging financial times and unfortunately it is no longer viable for us to continue operating and maintaining two pilot vessels. LK Mitchell has served the port gallantly for 40 years and whilst we are sad to be saying goodbye we are delighted to be partnering with Fowey Harbour Commissioners.”

Captain Paul Thomas, chief executive and Fowey Harbour Master, added: “Sharing resources with Falmouth means a great deal to Fowey harbour. It is hugely reassuring to know that we’re able to rely on a neighbouring port to provide boat cover which will ensure we continue to deliver a 24-hour pilotage service in our harbour.” 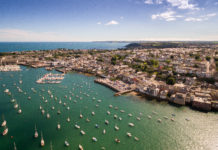