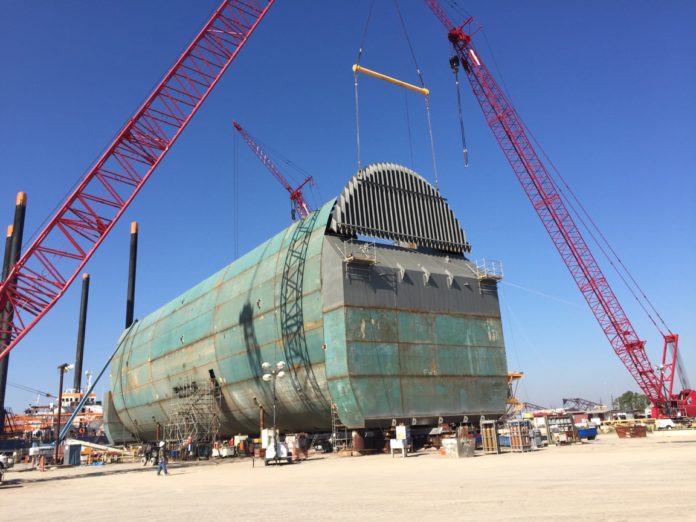 American wave energy developer, GWave, has today announced its plans for a 9MW wave energy project to be deployed at Wave Hub.

GWave, based in Portland, Maine, has spent the past decade developing its Power Generation Vessel (PGV) technology, and is preparing to bring the first full-scale vessel across the Atlantic for installation at Wave Hub, off the Hayle coast.

GWave said it chose Wave Hub in recognition of the strong wave resource, infrastructure, and industry experience available there. Over recent months GWave has engaged with the south west and wider UK supply chain, including Falmouth-based Mojo Maritime and A&P, as well as Tension Technologies International up in Northumberland..

GWave and its partners are now conducting detailed tests of the mooring system at the Coastal, Ocean and Sediment Transport (COAST) laboratory at Plymouth University.

GWave’s CEO, Robert Stoddard, said: “Our project launch at Cornwall’s Wave Hub facility will be a critical step in GWave’s programme to bring to market cheap, clean electricity from the ocean.

“Wave Hub was our clear first choice for the full-scale demonstration because of the world-class facility and staff at Wave Hub as well as the deep maritime expertise and experience of South West businesses.”

Claire Gibson, Wave Hub’s MD, said “Today’s announcement lifts the lid on a well-kept secret. GWave’s wave device is exceptional and we are excited by the prospect of it being demonstrated at Wave Hub in Cornwall. ‎ We look forward to working with them ‎to achieve what will be a major milestone for the ‎industry.”

Johnny Gowdy, director at sustainable energy consultancy, Regen, welcomed the news. “Two things really stand out about the Gwave project,” he remarked. “Firstly it has been financed entirely by the private sector and is supported by a very strategically focused investor.

“Secondly, with a massive 9 MW capacity, the GWave generator is bigger than the largest offshore wind turbine. It could therefore open the possibility of large scale wave energy at a price that could compete with the cheapest low carbon technologies.”

GWave will be taking part in the Marine Hub Cornwall stand at Renewable UK Wave and Tidal, London on February 23.