It was Jamie Oliver himself who brought Appleton into the Fifteen Cornwall kitchen.

During his ten years, he has designed menus and cooked meals for more than three quarter of a million guests and overseen the training of over 100 new chefs.

And now he is leaving Fifteen Cornwall to begin the next chapter in his celebrated culinary career.

“Fifteen Cornwall is one of the biggest restaurants in the region and Andy has been central to our success.  His commitment and creativity have inspired hundreds of chefs and apprentices and he will always be at the heart of our story. I am very grateful to him for his unfailing support.”

Jamie Oliver added: “I’ve known Andy for a long time and he has done an incredible job in building Fifteen Cornwall’s reputation as a world class restaurant and champion of aspiring chefs.

“I’d like to give him a massive thank you for all his hard work, his leadership and his dedication towards the Apprenticeship Programme. He’s a great chef and I wish him well in whatever he does next.”

Now the search is now on for a replacement. 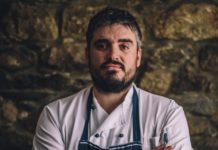