Despite it being one of the busiest times of the year, an Isles of Scilly flower farmer has travelled out to Malaysia as a ShelterBox volunteer.

Ben Julian, co-owner of St Martin’s-based Scilly Flowers, has flown off to Malaysia to help those whose homes have been destroyed by intense monsoon flooding.

This is Julian’s second deployment for the Helston charity since he completed his training in 2012, following a deployment to the Philippines last year.

Along with other volunteers, Julian has been travelling deep into the rainforest to assess the situation for families living along the River Timbeling, north of Kampong Kuhala Tuan.

He said: “In the Kampong Kuala Sat we met Zul Kefli in what used to be his family home. Only the floor was left. His house had been built of concrete, but it wasn’t strong enough when the massive flood came. The family managed to evacuate, but they had no time to plan their escape and left everything behind. They have lost everything.”

Whilst he’s away, wife Zoe has been left to manage their postal flower delivery business.

She said: “You’d think it would be the worst time for him to leave work – it is the busiest – but in actual fact it’s quite do-able.  We’re well organised and have an excellent team working here on the farm.

“The worst part is that the children and I miss him, but we know he’s doing an amazing and vital job and with social media it’s really easy to keep in touch, amazingly even in the middle of a rainforest.” 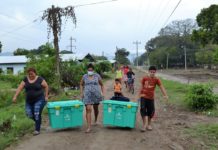 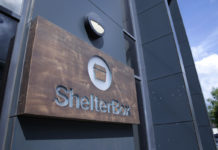 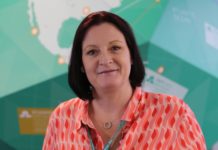