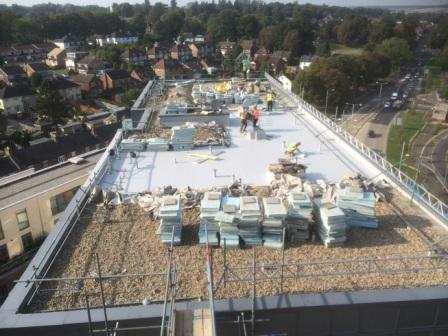 A Cornish roofing specialist has been invited to quote for a six-figure contract in Manchester thanks to a recent record-breaking performance.

Redruth-based JR Flat Roofing completed a job in Hemel Hempstead this autumn to refurbish two roofs where the waterproofing layer was in need of repair.

The project concerned residential buildings which had to remain fully occupied during the works, with minimal disruption – however, working with Heritage Scaffolding Ltd of Berkshire, JR Flat Roofing completed the task in under three weeks.

This meant JR Flat Roofing refurbished 1100m2 of roof and also erected and dismantled two 30-metre-high access platforms in record breaking time – prompting the client to call on the firm for an additional project in Manchester, to begin in the New Year.

Nick Rogers, MD for JR Flat Roofing is proud of the team’s work, saying: “We are experienced in challenging projects which have a tight deadline, but our team and Heritage Scaffolding really excelled themselves in Hemel Hempstead.

“2014 is our 30th Anniversary year and we’re hoping to build on its successes in 2015. The project in Manchester is still in the planning stages, but we’re already looking forward to our next challenge.”

Founded 1984, JR Flat Roofing carries out work across the UK. From a turnover of £1.4 million last year, £1 million came from work outside of Cornwall – bringing revenue back into the Duchy.