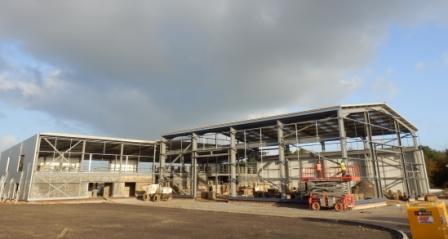 The last of the major steelwork has been completed at LDD Ltd’s new headquarters on the Tolvaddon Energy Park.

The new £3.3 million office and workshop complex is now being clad in preparation for LDD’s move from its existing base in Penryn, next April.

LDD is a leading global specialist seabed foundation installation service company. The company designs, engineers, builds and operates foundation and drilling equipment across a whole host of different projects around the world; which include oil and gas offshore structures; LNG/iron ore/coal and other resource marine terminals; ports and harbours and giant offshore wind turbines.

Founder and MD, Jason Clark, said: “Excitement is increasing every day for the whole team at LDD as the new building rapidly takes shape.

“We are able now to actually see the new office and workshop spaces we will be occupying in 2015 and start to really connect to the fantastic facilities that it will give us. Everyone is looking forward to moving into the office and workshop and we have big plans for the future of our company.”

The move isn’t all about a new building, with LDD ready to accelerate its expansion into a new ‘spin off’ company  – LM Handling Ltd.

Clark continued: “As a company founded in Cornwall we plan to expand operations from our current 70 employees over the next five years.

“We want to continue to create well paid, skilled jobs in an area traditionally reliant on low paid employment opportunities and contribute much more to putting Cornwall on the global map as a centre of excellence in our area of work; inspired by past times when Cornwall led the world in several areas, such as hard rock mining.” 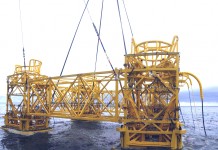 LDD moves into new base