North Cornwall MP Dan Rogerson is urging the Government to reduce taxes on beer in order to support the pub and brewing industries.

Rogerson, the vice-chairman of the All Party Parliamentary Beer Group, spoke during a House of Commons debate yesterday about the importance of reducing the beer tax and the crucial role of pubs and brewing for local jobs.

He specifically called on the Government to reduce the beer duty escalator – which sees tax on beer increase by 2% above inflation each year – in the upcoming budget at the end of March.

Suspending the beer duty escalator, he says, would help reduce pub closures, support jobs in the beer and pub industries, and make sure that going to the pub remains affordable.

The British Beer and Pub Association estimates that pubs and breweries employ around 2,100 people in north Cornwall alone, providing around £23.8 million in wages for the area.

Speaking after Tuesday’s debate, Rogerson said: “The beer and pub industries are crucial employers in north Cornwall, and support for pubs and brewing is important for our communities and for local jobs.

“That’s why I am calling on the Government to reduce the beer tax in the forthcoming budget, and to halt the pattern of rising tax on beer that we have seen over the past few years.

“Going to the pub needs to remain affordable in order to protect jobs and stop the closure of well loved community pubs.” 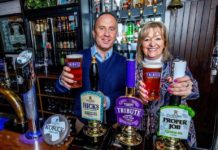