Wave Hub has welcomed an agreement from the South West England and Scottish Marine Energy Parks to work together to support the development of the wave and tidal industry in the UK.

The agreement will be officially signed today (February 28) at the Renewable UK Wave and Tidal Conference in London.

Wave Hub, which sits off the Hayle coast, is part of the South West MEP and is the world’s largest grid-connected wave energy test site. It has welcomed the agreement as further evidence of the UK’s comprehensive offer to the global wave and tidal energy industry.

Wave Hub general manager Claire Gibson, who is addressing the Renewable UK Wave and Tidal Conference about the role of testing facilities, said: “This agreement sends a clear and positive message to the industry that the UK is serious about accelerating commercial development of the marine energy sector.

“The two MEPs have much to offer each other and their complementary facilities and expertise are an enormous strength that can take projects from inception and prototype testing to full array deployment at Wave Hub.

“We look forward to working more closely with our Scottish colleagues to ensure that together the UK’s testing facilities continue to offer marine energy developers a technology pathway that is second to none.” 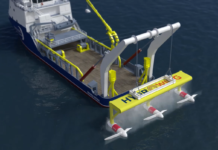