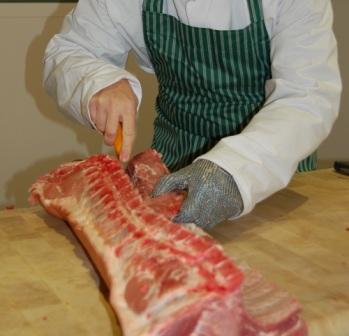 What is claimed to be Cornwall’s first butchery school is set to open its doors this month.

Etherington’s Butchery Academy will teach a variety of butchery techniques, including boning and jointing different types of meat.

The inspiration behind the school is MD Mark Etherington’s belief in apprenticeships. He explained: “It is very important that we equip our local young people with the right skills for employment.

“It is also important that we keep the butchery trade alive so we decided to teach the traditional skills to apprentices. In creating the academy, we have found that many other people are interested in learning these skills too, such as chefs, smallholders and foodies. It is proving to be an incredibly rewarding venture.”

Scorrier-based Etherington’s is already in talks with educational establishments throughout Cornwall about arranging for young people to study at the Butchery Academy for their NVQs. It is hoped that the Government will part fund the NVQs which will take around six months of training.

Chefs are also being encouraged to come on day-release courses or just for one-off lessons, as Etherington’s already works with the trainees at Fifteen Cornwall and has trained 18 of them over the past year.