Organisers are hailing the opening weekend a success after crowds flocked to the 2012 Truro and Penwith College Fal River Festival.

Despite the mixed Diamond Jubilee Bank Holiday weekend weather around 25,000 people turned out to enjoy the activities on offer including the two-day Fal Fish Festival.

The ten-day festival, which celebrates life on and around the River Fal, runs until Sunday, June 10 and features over 150 events covering music, theatre, art, food, drink, sport and water.

Festival director, Toby Budd, said: “Once again the opening weekend has proved to be a great draw and has created a real buzz around the Fal River.

“Falmouth has been absolutely packed over the weekend and it was brilliant to see so many people getting involved.

“We know around 18,000 people visited the Fal Fish Festival over the weekend, and it was great that visitors from the cruise ship also got to see Falmouth at its best.”

The festival unofficially kicked off on Thursday (May, 31) with Finley Quaye’s first performance in Cornwall in Events Square.

The gig was followed on Friday  by the annual Beer Fleet along the Fal River. Over 300 people, including Betty Stogs, packed a flotilla of boats and enjoyed beer, pasties and music on the voyage to Falmouth.

The festival was then officially opened in Events Square, before crowds danced away the night to Falmouth Soul Sensations.

Festival chairman, Tim Light, said: “The Beer Fleet is an amazing way to start the festival and it grows every year.

“We had an array of vessels join the parade, including our first ever jetski.”

The festival runs until Sunday, June 10. Events include Film on the Fal, where the King Harry Ferry is turned into a floating cinema. 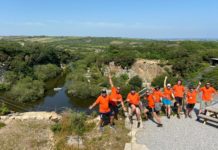 First birthday for Via Ferrata 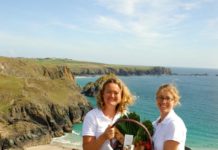 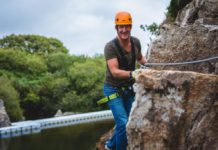 Team building with Via Ferrata