Mike Truscott, founder head of Westcountry PR Services Ltd, has set out to prove the truth of the old saying that there is a book in every one of us.

Falmouth-based Mike has publicised hundreds of Cornish businesses in over a quarter-century as a PR writer and previously interviewed thousands of people in all walks of life as a journalist.

He says that nothing has given him more pleasure than writing everyday life stories about everyday people, and he has long since aspired to set himself up as a biographer.

Until comparatively recently, the cost of printing just a small number of books ruled out such a venture. Now technological advances and the emergence of low-cost ‘print-on-demand’services have removed that obstacle.

Truscott has launched Golden Replay Biographies, a service enabling “everyday” people to have their life stories professionally written and quality-printed in book form.

“If there’s one thing I’ve learnt in over 40 years of writing,” he said, “it is that there is no such thing as a boring person. I’m convinced that everyone really does have a fascinating story to tell.

“Some of the people I have interviewed as a journalist have been rich and famous, but the great majority have been ‘ordinary’ people. And all of them, when prompted, have revealed lives full of interest and inspiration.”

Truscott’s new service involves a programme of six interview sessions and he has quickly secured his first few clients, including a former Sun page 3 girl embarking on a kiss-and-tell exercise.

“I must confess she’s not quite the typical client I had in mind! My other clients include someone who was told she had just six months to live – eight years ago!

“All of them have recognised that Father Time is marching on and that it’s a great idea to have the richness of their lives recorded for passing on to their children and grandchildren.” 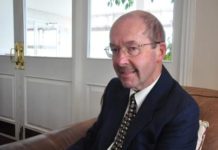