A&P Falmouth received a name check in Parliament this week, for the “major part” it has played in reducing the Ministry of Defence’s spending.

The vote of thanks came on Monday, following a question from Truro and Falmouth MP Sarah Newton about the benefits of the cluster contract.

Ship repairer A&P has a contract with the MoD to provide upkeep support to some of the Royal Fleet Auxiliary (RFA) ships. The partnership has led to a more economical approach to ship repair and maintenance throughout the RFA flotilla.

The new approach is estimated to deliver more than £330 million in cost savings to the MoD over 30 years on the previous arrangements, which saw individualcontracts competed for as and when they were required.

Peter Luff, Parliamentary Under Secretary of State for Defence, said the company was playing a major part in ensuring the contracts are delivering more for less, with much greater capability compared to previous contracting arrangements, at lower cost.

Replying to Newton, he said: “I congratulate her constituents in Falmouth for the part they are playing.”

Culminating from the two years of support and maintenance, the RFA Mounts Bay has recently left Falmouth after undergoing a multi-million pound refit at A&P. Work included modifications to the exhaust system, major overhaul of the propulsion system and general maintenance to meet Class and Flag State requirements for certification.

Peter Child, Managing Director of A&P Falmouth, said he was delighted the Group was getting the recognition it deserved at such a significant time.

“These instantly recognisable grey ships are of a huge importance to Falmouth,” he said. “The contract guarantees the company – and it’s highly skilled employees – with vital security for the future.”

Sarah Newton MP to stand down 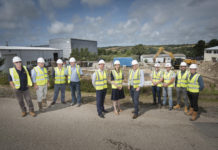