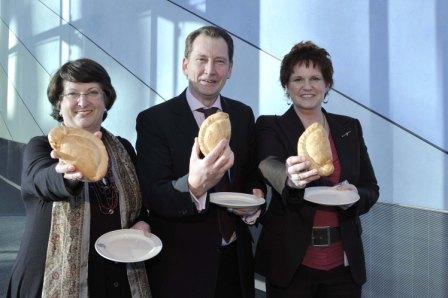 It is a show of support for the Cornish Pasty Association (CPA) which is currently waiting for the European Commission to grant final approval for the (Protected Geographic Indicator) PGI status for the Cornish delicacy.

MEP Graham Watson, who handed authentic Cornish pasties to his European colleagues at the European Parliament, commented: “Cornish pasties make a valuable contribution to the Cornish economy. It’s a great product that supports thousands of jobs. Many products across Europe have benefited from gaining legal protection, from Feta Cheese to Parma Ham, to stop consumers being misled as to their origins.

“Tragically some producers are trading on Cornwall’s heritage without their pasties ever being near the Duchy. It is important to raise the profile of the County, and gain wide ranging support for the pasty’s application for protected status.”

“Ahead of St Piran’s Day I was delighted to share Cornish pasties with fellow Parliamentarians from across Europe. I know they all enjoyed tucking in!”

Larry File, chairman of the CPA, commented: “It is fantastic to receive support from a local politician who can demonstrate the merits of our application in Europe. We are grateful that Graham Watson has taken our pasties to the European Parliament. We hope that his colleagues enjoyed eating them and now have a convincing reason for why the Cornish pasty should be protected.”

Next week Watson will be meeting new EU Agriculture Commissioner Dacian Ciolos where he will again be raising the Cornish pasties PGI application.

The CPA is currently waiting for the European Commission to finally approve the PGI status for the Cornish pasty. Once granted, it will mean that only Cornish pasties made in Cornwall and to a traditional recipe will be called ‘Cornish Pasties’.