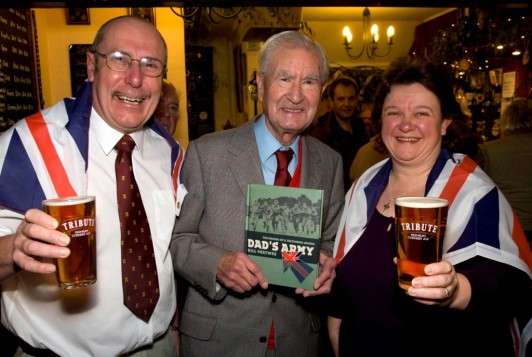 Regulars at Pelynt’s Jubilee Inn received a treat recently when they were joined by Dad’s Army legend, Bill Pertwee.

Pertwee made a stop off at the St Austell Brewery pub to sign copies of his latest book, Dad’s Army: The Making of a Television Legend.

Most widely known for his role as ARP Warden Hodges in Dad’s Army, he joined guests at the Jubilee talking about his new book and reminiscing about the legendary TV programme.

Pertwee featured in the very first episode of Dad’s Army and remained part of the cast until the last episode. He then went on to forge a successful and lengthy career as a respected comedy actor.

To mark Pertwee’s visit to the Jubilee, guests donned 1940’s war time attire and brought along souvenirs from the Home Guard era. Dressed as evacuees, children from Pelynt Primary School also joined in the evening’s event and met him personally.

Charlie Edgeler, landlord at the Jubilee Inn, said: “We were truly honoured that such a special TV legend made a stop off at the Jubilee Inn. To mark his visit we put on a special commemorative menu and guests enjoyed dressing up and celebrating the occasion.”