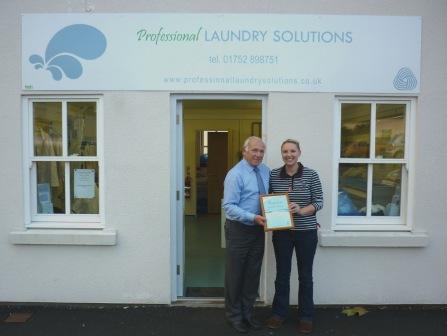 Redruth-based commercial laundry specialist Brewer and Bunney has scored a first after helping an Ivybridge laundry become the only one in Devon to have a revolutionary environmentally friendly Lagoon Wet Cleaning System.

Professional Laundry Solutions only opened its doors in August, but thanks to Brewer and Bunney it has become the first in Devon use the Lagoon System, an alternative to traditional dry cleaning.

According to laundry owner Amanda Barnes, the environmentally friendly system is already proving very popular and attracting people not just from the town, but from much further afield.

She said: “A lot of people don’t realise that dry cleaning involves soaking the surface of clothes in solvents and I really didn’t want to use a system like that, or have members of staff working with solvents, so we are delighted to be the first laundry in Devon to have the new Wet-Cleaning System installed, to complement our traditional laundry services.”

Brewer and Bunney sales director Terry Willetts said he was delighted that Amanda had not only opted for an environmentally friendly cleaning system, but had increased business as a result.

He commented: “The Lagoon system really is revolutionary and for us to be able to supply the first one in Devon is fantastic. We also supplied the first one in Cornwall so are delighted to have broken new ground in Devon as well.”

A decade of investing in people