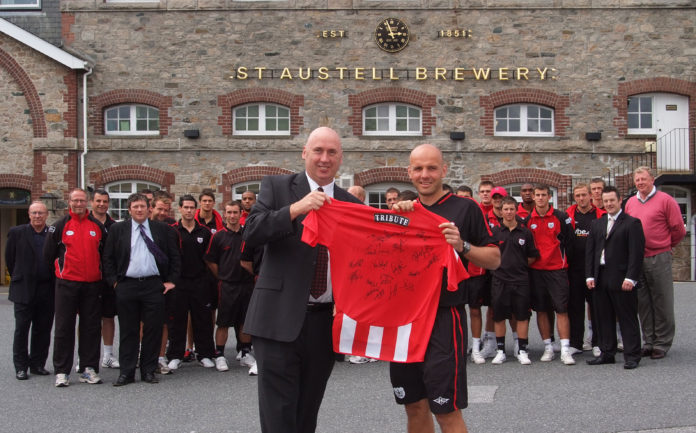 The team’s new shirts were unveiled at St Austell Brewery last week, in between the club’s whistle-stop tour of the County when the club played a number of pre-season friendly matches.

The ‘Tribute Cornish Tour’ saw Exeter City take on Southern League side, Truro City FC, and South West Premier team, St Blazey AFC. Exeter triumphed in both matches, with a 4-1 win against Truro and an emphatic 8-0 victory over St Blazey.

The sponsorship deal with the club is part of the Brewery’s ongoing and wide-ranging support for sport across the region. As well as sponsoring a number of individual football and rugby clubs in Devon and Cornwall, Tribute is the official beer of South West rugby through its sponsorship of 14 South West Leagues.

Danny Crabb, regional sales manager, St Austell Brewery, said: “We’re delighted to have agreed this deal to be sponsoring Exeter City FC from next season. Tribute Ale has enjoyed a year of success, and with Exeter City’s recent promotion, it appears we have a winning combination.

“Visitors to the club’s bar will also be able to continue enjoying St Austell Brewery’s selection of excellent ales.”

“We are immensely proud to have extended our excellent partnership with St Austell Brewery.From our very first dealings with our friends there we have both benefited enormously from the progressive commercial relationship we have established.

St Austell’s involvement with us over the past few years has coincided with great success on and off the pitch, and that is not entirely a coincidence.Their support has been immense and we thank their team of professionals for backing ours so well.

“Showing Tribute on the back of our kit this season is a very public demonstration of our partnership, but the highly successful Tribute Cornish Tour and the newly opened Tribute hospitality room at St James’Park and, of course, the first class products and backing we receive for our thriving bars all add to what we know is being viewed by others as a model for partnership based sports sponsorship. The fact that we have now signed this new and extended agreement is testimony to this and to our mutual commitment to furthering each others’ success”

The announcement of the Exeter City sponsorship deal continues a hugely exciting year for St Austell Brewery and its Tribute Ale. Earlier this year Tribute was announced as the highest new entry – and the only Devon or Cornwall-brewed ale – to feature in the annual Brands Report 2008, and just last week, Tribute featured in The Morning Advertiser’s top ten of premium cask ales.