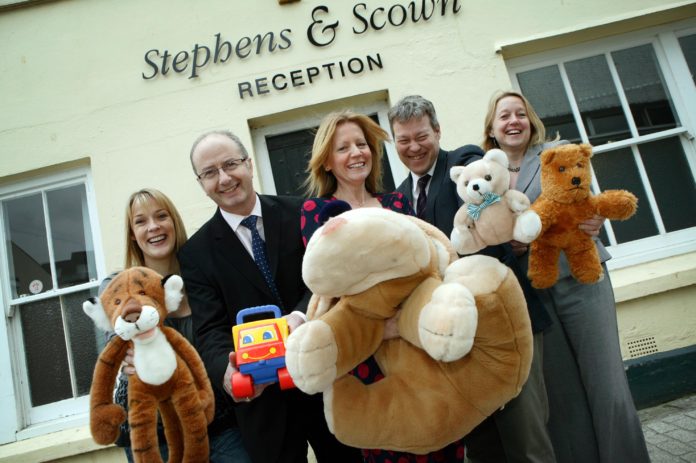 Thousands of pounds have already been raised for NSPCC Cornwall by South West legal firm Stephens & Scown, shortly after adopting it as its charity of the year.
The latest event to help boost funds for the organisation was held at Boconnoc House, Lostwithiel and was sponsored by the firm, which has offices in Truro and St Austell. Stephens & Scown announced its formal support for the charity in March.

The drinks party raised £1,100 and was attended by around 80 people. The Young Marketing Group at Stephens & Scown also held a ball recently at the Hotel Bristol in Newquay raising £960, making a total of £2,060.

Staff are being encouraged to take part in other activities throughout 2008 to raise funds.

Sarah Fitzgerald, family law solicitor for Stephens & Scown said: “The NSPCC plays a vital role in providing support for children and young people in Cornwall. Sadly, I often see cases involving children whose lives have been blighted by physical, sexual or emotional abuse which is why we are supporting such an important charity.”

The NSPCC’s purpose is to end cruelty to children and is the UK’s leading charity, specialising in protecting children and young people from abuse. The Cornwall base of their Devon & Cornwall Young Witness Support project is in Truro, co-located with their Cornwall Family Support Project.

Specially recruited and trained volunteers provide support and preparation to young witnesses who have to give evidence in criminal trials involving child abuse. In February 2006 ChildLine and the NSPCC joined forces to help, support and protect even more children and young people.

NSPCC Cornwall is hoping to raise £120,000 to continue to provide these schemes in their new premises in Truro, including the running of their new essential video link equipment, which will ensure that children do not have to attend court to give their evidence and therefore help to reduce their trauma and helping them to be calmer and more competent witnesses.

Carrie Cardale, the charity’s South West Community Corporate Manager said; “We were delighted with the success of the drinks party and with the news that Stephens & Scown has already raised so much for our charity. We rely on support from local people and businesses to help us continue our work in Cornwall protecting children in every area of their lives.”

• The NSPCC has been directly involved in protecting children and campaigning on their behalf for almost 120 years. It has services throughout the UK and the Channel islands which help more than 10,000 children and their families every year. Most of its work is with children, young people and their families. It also work to achieve cultural, social and political change – influencing legislation, policy, practice, public attitudes and behaviours and delivering services for the benefit of young people.

• Stephens & Scown has offices in Truro, St Austell and Exeter.