Most of the time, when I’m going away, the journey itself is really just an unwelcome necessity, often a burden and nothing more than a tool to get me to my chosen destination.

Not the case when travelling with IOST, it’s most definitely an integral part of the experience – whether you’re dolphin watching on the Scillonian III or on the Skybus getting a fabulous birds eye view of the dramatic Cornish coastline and the glorious islands and turquoise sea.

IOST is the sole provider of transportation from the mainland to the Isles of Scilly. It also supplies the islands with everything else too, with its freight ship, Gry Maritha. IOST is therefore utterly fundamental in primarily making the Scillies a viable place to live and secondly in facilitating a prospering tourism industry which in turn reflects on a more positive island economy and joyous community.

It has remained true to its roots given that Isles of Scilly Steamship Company Ltd was in fact formed by the inhabitants of the Islands to provide regular, cost effective and enjoyable travel between the mainland and the Isles of Scilly.

In 1987, Skybus launched scheduled commercial passenger flights as an alternative to the Scillonian and the Helicopter (which has now ceased and was not part of the Steamship Group).

Transporting passengers a short yet beautifully scenic 28 miles down the Cornish coast, Skybus now has eight planes and operates regular scheduled flights to the Isles of Scilly from Land’s End, Newquay and Exeter Airports. The Twin Otter planes cater for up to 19 passengers and the Islanders, eight.

However, just because you’re not travelling very far shouldn’t dissuade you from going – there’s often this notion that because the Scillies is so close to Cornwall, it doesn’t seemingly qualify as a proper holiday, particularly for people of Cornwall.  This is nonsense, why go anywhere else if you’re looking for a relaxing getaway? There are few places that provide both such beauty and such an incredible experience that really detaches you so far from the daily grind. It also feels far more exclusive than your typical European hotspots.

We decided to fly both ways with Skybus. The overall experience is great. Unlike holidaying abroad, where I tend to feel anxious at the airport, here I felt at this point the holiday had started. A very relaxed non-commercialised airport which immediately sets the tone and reflects the Isles of Scilly way of life.

After the speediest ever check-in you can then admire the range of artwork and there is a large glass fronting in the waiting area and café where you can just about catch a glimpse of the islands on a clear day along with watching the planes take off and land. I was keen to spot their most recent purchase which was a plane used in the new James Bond film, Spectre! 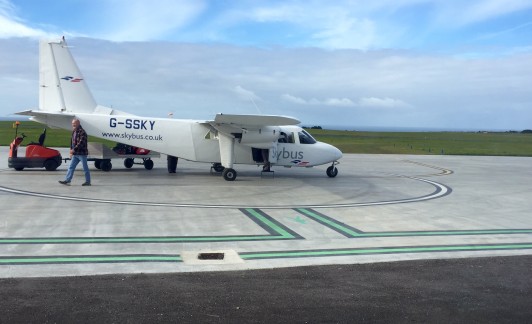 The flight is so much fun, with everyone avidly turned towards the small windows to admire the soul- stirring scenery. It’s a totally different ball game compared with most forms of travel and far more personal – I even managed to have a little chat with the pilot. If you were to fly out then to fly straight back again it would be a worthy and enjoyable experience on its own merits, and you don’t need to be an aviation enthusiast.

We were staying on the beautiful Tresco Island, which did mean that we then needed to catch one of the connecting boats from St Mary’s – however once again this only adds to the experience and I’m glad this is the practice. Moreover the service is seamless and the Tresco staff liaises with the IOST staff to ensure that everyone is regularly updated so there are no delays and all runs smoothly. Friendly and relaxed yet with superb efficiency. The level of service is the best I’ve had from any travel provider.

The Scillonian is reputedly second best to flying, however it really depends – the boat can be a real exploratory and thrilling experience. A great way to study the beautiful coastline from Penzance to Land’s End, including passing Porthcurno and the Minack Theatre. Then you may be fortunate enough to see dolphins or even the odd Basking Shark.

What Isles of Scilly Travel offer is in fact far beyond just travel, it is an experience which undoubtedly forms an enjoyable part of any holiday to the Isles of Scilly.